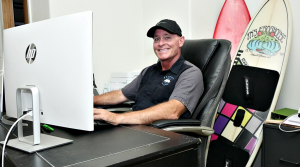 John Starkey in the office

While driving down the scenic roads of Honolulu, Hawaii you may find yourself passing a large, yellow sign on the side of a box truck. This would be your clue that you’re in front of Starkey’s Auto Repair, DRIVE’s client locally known as the dealer’s mechanic. Located in the heart of a blue-collar neighborhood, John Starkey, owner of the shop, takes pride in being the place people trust to fix their car. His team of 13 is focused on educating their clientele and making sure they get the best service possible.

Starkey’s Auto Repair is located in Honolulu, the stunning capital of Hawaii. Situated along the southeast coast of the island of Oʻahu, this town is full of possibilities. Whether that be exploring the coastline, visiting a natural museum, or enjoying a performance from the symphony. On the weekends, John loves to go out and surf big waves – the whole reason he moved to Hawaii! 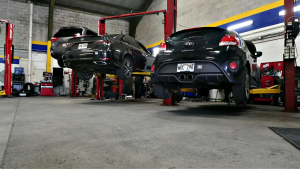 So far, Starkey’s has been open for an exhilarating five and a half years. Originally, John had no intentions of running an auto repair shop. It wasn’t until the auto sales business he was running out of his residence got shut down did he get his start in this industry. When one of his neighbors gave him up, he needed to find a place to run his business ASAP. One of his friends tipped him off about a man who owned a fairly small repair shop with a single side roll up door and four lifts that was looking to sell. John swooped in and quickly made an arrangement with him. Soon after inheriting the reins, he was alerted to an issue on the island – the dealerships couldn’t fix their cars fast enough, with customers waiting two to three months for repairs. Once John was able to strike a deal with one of the many in-need dealerships his profits increased by $100,000 the first month alone.

Right after his drastic increase in profits is when Starkey’s Auto became a DRIVE client. Before joining DRIVE, John says there “was no organization, the employees would teach me what little they knew and would just get by.” With such an overhaul came the need for stability. DRIVE provided this for Starkey’s and now the shop is “well calculated and self-sufficient.” 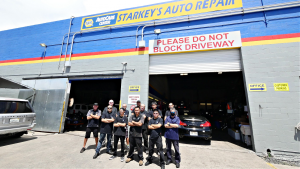 John prides himself on the environment he’s created at his shop! The upstairs portion of his place houses a break room with a massage chair, couch, a bed, a stocked refrigerator, and a large screen tv with accompanying video games. He has 13 wonderful employees, including his shop manager, Zack DeWater. He makes sure to provide for them offering full benefits, they all have medical, dental, and vision coverage. If one of his employees needs something, John buys it. He’s proud to say all of the equipment in the shop is brand new and cutting edge. His employees show their appreciation by consistently hitting their numbers each week, with most of them overachieving!

Since John is still new to owning an auto repair shop, he’s committed himself to not only being the best boss but the best student as well. John took a trip to the East Coast to visit two shops and learn more about the industry. He first visited Dave Bloom, owner of Pine Aire Truck Service, in New York. John shares his new understanding: “What I learned from Dave was not necessarily how to run my shop. He taught me a lifestyle. He taught me to trust my team and be a leader.” While he was there Kevin Reichelt, owner of Steller’s Garage, drove up from Connecticut to meet them. Kevin helped arrange the whole trip, putting John in contact with Dave and encouraging his visit. 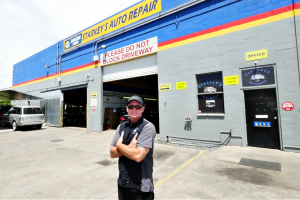 John says after only a few short moments he felt like he had known both of them since high school, even though he’d only communicated with them over the phone before this. Between Dave and Kevin is a lifetime of business owning experience. “They both taught me that if you don’t see the end picture, the roadmap will be fuzzy the entire journey.”

This camaraderie can be credited to John’s attendance at the DRIVE EXPO. While he was there, he was able to network with a multitude of shop owners. Listening to their experiences and advice resonated with him. One shop owner in particular had a huge influence on him. John says, “Everything he said was what I wanted to hear. He, along with the rest of the members, have been instrumental in my shop’s growth.” John cites this as the reason he loves the DRIVE EXPOs, he’s a student of shop ownership and always ready to talk to others in his field of study. He’s looking forward to attending DRIVE EXPO 2022 as “networking has been a key component of our success.” 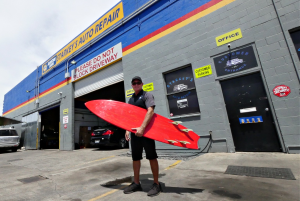 John Starkey on his way to the beach

John’s outlook on owning a business and his life has changed so much in the past five years. His new ideals are as follows: “Life isn’t about just working your butt off until you die; it’s about enjoying the journey. The journey is so much more pleasant when you have laser vision, determination, and a well thought out plan. If you have these three things, success will come over time.”

Thank you and congratulations to John and everyone over at Starkey’s Auto Repair!

John Starkey live from the beach on DRIVE FACEBOOK LIVE