FOR RAPID TIRE OF LAUREL, MONTANA, IT’S ALL ABOUT THEIR CUSTOMERS. 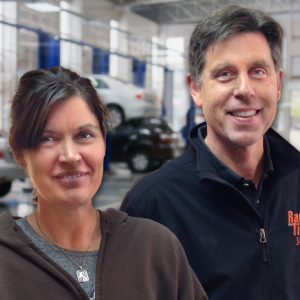 Brother and sister, James and Nadine Horning of Rapid Tire, know what has made them successful. It’s their customers who, over the years, return for needed service on their vehicles. Great customer service has always been the guiding force – ever since their dad opened the business in 1976. And now that they’ve owned it since 2016, that has continued.

Rapid Tire is located in picturesque Laurel, Montana, not far from Billings and Yellowstone National Park. During the summer months, Rapid Tire does receive a decent amount of traffic from tourists, but it’s the community and those familiar families and faces who are the key ingredient for their continued success and growth.

“I believe we stand out in our community because of our customer service.  We have always worked hard to solve customer problems and to go the extra mile in doing so.” – James Horning

Something that speaks to the success of Rapid Tire and their focus on customer service are the free services they offer. They include pressure checks and wheel torque checks to anyone. With a tire purchase, they offer free tire rotations. With all services, tires and general repair, free vehicle inspections. James and Nadine offer these services for free because they want their customers to have safe, reliable vehicles. Having that philosophy has proven to be good for business plus it’s just the right thing to do for their neighbors and community.

When Ed Horning opened the business in 1976, the business began exclusively as a retail/wholesale tire shop. Currently, the tire side of the business is just shy of 50% of their revenue, while general repair the remainder. 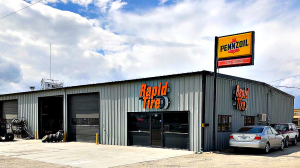 James grew up at the shop and was part of Rapid Tire through high school. He then left to go to college in Chicago. And he stayed there for 15 years and was a Commodities Trader on the Chicago Board of Trade. Ed Horning was getting ready to retire and around 2015, James knew it was the right time to move his family back to his hometown of Laurel. After all, bringing up 4 kids in ‘Big Sky Country’ is just about the best family-friendly environment for anyone. And by 2016 James and Nadine bought the business.

A few of the major brands they sell are Firestone, Fuzion, Hankook and Uniroyal. Others are sold at Rapid Tire but those are the major portion of their tire sales.

In addition to James and Nadine, they have 8 employees on board, with two of those being at Rapid Tire for over 40 years. There’s no better example of the family atmosphere strived for by James and Nadine than that.

As with any business today, recruiting can be problematic. But for Rapid Tire his crew is pretty stable. But this last year he did lose a tech. James was able to hire back two previous employees. They had left on great terms with the shop and had other opportunities that didn’t work out. And they wanted to come back. There isn’t a better example of a well-run business than former employees who want to work there again. James and Nadine also bit the bullet and increased the base pay this past year for employees. It was something that needed to be done to stay competitive and show the team they were important to the success and growth of the business.

When asked, James says the following on how he’s grown as a business owner: “In the time I have owned the business I have become much better at dealing with employees.  I have learned how to manage the immense workload that comes with the job.  I have become smarter in how I manage people and resources.  I have improved my time management skills.”

About 3 years ago Rapid Tire partnered with DRIVE. James was exhausted from having to arrive before opening and always staying late, plus the weekends. He was wearing too many hats. It was just frantic and he was barely in control of the business, never having the time to catch up on the ‘owners jobs.’ Since working with DRIVE, James says, “We have made many changes that have greatly altered my day.  I no longer spend my day as a Service Advisor.  I go to the shop after I drop my daughter off at school.  I get there an hour after we open and usually leave by noon or early afternoon.  I only go in 4 days a week and we are no longer open on Saturdays.  I still do some work from home but never in the evenings and rarely on the weekends.  I have gotten very deep into my ‘Owners’ to do list and added to it!  I am working on the business now instead of in it.  Simply stated, I have more time.” 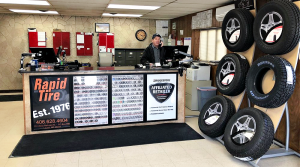 In addition to Laurel the Billings area has seen rapid growth over the past 10 years. With that growth and more people moving to the area, that means more vehicles that need servicing. Which is certainly a business opportunity. James and Nadine are confident that the business that they own and that their father started, is now positioned to help everyone in the community, both longtime residents and brand-new folks moving into the area.

With four kids, James has his hands full outside of the shop. But something fun they do together as a family unit is collecting and selling Legos. Not only is it fun it’s also become a ‘side hustle’ in which the whole family participates. Everyone participates and business lessons are learned – and all profits go to a college fund. A win-win for sure.