HOW COLLISION SHOPS ARE ADJUSTING – AND SUCCEEDING – IN THE ‘NEW NORMAL’ 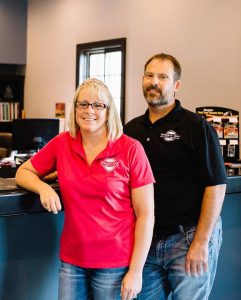 How do collision shops stay relevant when the ‘New Norm’ means less people driving which equates to people not getting into as many accidents? Shop owner and DRIVE client, Kristi Wright of Wright Way Collision Repair of Albany, Indiana shares the actions she has taken to keep her business successful and growing during this uncertain time.

You would initially think that since there are less accidents that cutting back on marketing is the right step to take. Not according to Kristi. Not only did she continue with her current marketing actions, but she decided to increase her direct mailers and digital marketing.

Kristi explained, “With people at home more getting their mail and using their phones and computers for searches, I made sure one way or another they would see our shop.” 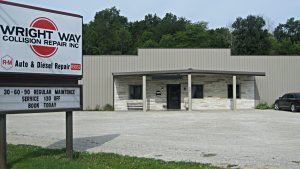 Kristi and her team had to think outside the box during 2020 and now, carrying that into 2021. New types of jobs that the shop didn’t previously perform are now part of their menu of services. Including rust repair, camper repairs, rocker panel replacements – these and more helped Wright Way Collision have a successful year.

“My team was great,” Kristi says. “They all continued to work. We continually reassured them that by bringing in jobs that we wouldn’t normally do, it kept paychecks coming and the shop open.”

Doing It Right at Wright Way

When the pandemic hit everyone was confused and scared that they were going to be out of a job. Especially when the whole country started to shut down. You’d hear about a shop down the street or a shop in your own neighborhood closing for good. Kristi really had to keep her team feeling secure so they could complete their work correctly, rather then worry about their job.

“Our leadership skills were tested,” Kristi stated. “Thinking outside the box was key to keeping work flow into the shop. We did whatever had to be done for both our team and business!”

She kept her team focused on the jobs coming in and soon realized sales were not being affected by the curve ball 2020 threw at them. It gave the team a sense of hope and purpose. Almost as if they could see the light at the end of a very dark tunnel.

Marketing is always important but it became even more so during the ‘New Normal’ we all have and are experiencing. For a business to grow during this period, putting even more of an emphasis on Marketing is imperative. Not all Marketing actions translate to money spent. Kristi and many DRIVE clients found that goodwill calls to customers not only paid off with more business in the shop, but it also translated to a increased purpose and a feeling of making a difference in their community too. This is an action that will continue, pandemic or no pandemic.

As a collision shop, owners need to ask themselves this: what can I do to make my phone ring off the hook with new customers. Just like Kristi you have to find ways to make your shop more marketable and desirable to make people want to get that dent fixed that they have postponed. Or maybe a rock flew up and cracked their windshield. How are you as a body shop owner going to market yourself and get them to want to get that fixed? Are you going to take a page from Kristi’s playbook and think outside the box and start doing new jobs you may not have completed before? Think about how you can expand your services but don’t forget to market those services to your existing customers and new customers. They won’t know unless you tell them!

Another resource Kristi relied on was her DRIVE family and the power of being in a Top 20 group. They all brainstormed together and kept everyone’s spirits up.

Always bouncing ideas off of each other and holding each other accountable while reassuring each other they will all make it out in one piece and stronger then ever! Plus Kristi is thankful for the team she has and how every single person played a major role in keeping Wright Way not just open, but successful during 2020.

I-CAR Footnote: In addition to being a client of DRIVE, Wright Way Collision Repair has been an I-CAR Gold Class® shop since 2017. 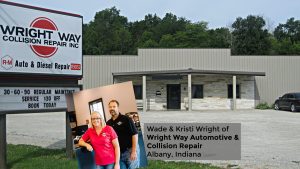 Read what I-CAR’s Bud Center has to say about shop walks and blueprinting.